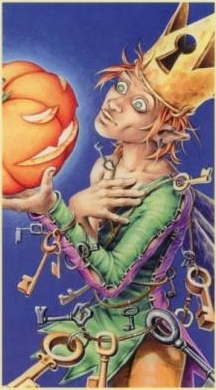 Ignorance, like doubt and uncertainty, are the basis of human nature and of the pathway towards wisdom.
The Fey that governs the card of the Fool is the Fey of many beginnings and of quest.
Just as an empty container can be filled, a blank page covered in writing, a question formulated to have an answer, the Fool indicates the emptiness of knowledge and of trust that can take shape and be reclaimed.
This card indicates the immense universe of the "it is not" and the "don't know", of things yet to be done, to be thought or to be understood. Those who "don't know" can be both noble princes and simple fools.

In a blue sky, with clouds or mist, the Fey Fool rises. His dress is divided into green and violet because his instinct is to push in different directions, often against each other. His eyes are like pools of emeralds, full of ancient wisdom, yet still childlike, as they know nothing.
A crown dominates his forehead, but contains a lock which is still closed, behind which are all his thoughts and knowledge of the world. In one hand he raises a pumpkin, carved with a grim and crude face, from which emanates a light that reflects on him. His other hand is turned towards himself, as if to ask a question, just mentioned from his half-closed lips.
A golden belt tied around his clothes holds infinite keys of strange shapes, some old some new, some big some small, some precious some cheap. Amongst these keys is without doubt the key that opens the noble casket of his mind.

In the older tarots the Fool was he who did not believe in God and was therefore excluded from his grace. Later on he became the one who walked on the edge of the precipice, not being aware of the abyss that surrounded him.
In the world today, full of answers and certainty, the Fool is the incarnation of a thousand questions, doubts and uncertainties. He always carries with him an undiscovered wisdom and an unexpected courage and humanity.
Often when the chosen card is the Fool, it is a time of confusion and doubt, but not evil or obtuseness. Just as we were all once children, the Fool recalls that part of ourselves when we knew nothing and looked at everything.

The crown indicates each person's potential, the knowledge and the spiritual strength of one's being.
The pumpkin indicates dependency on others, conformism, external quest when we should be asking ourselves.
The coat of two colours signifies how man's nature and thoughts are rarely coherent and concentrated, and how we often have to live with opposites that never mix.
The keys indicate the choices that man can make, and his profound and unalienable liberty.

The Fool is identified by the number zero. It is not before nor after any other card. It is free, and outside the scheme. There is a random potential in this card, not to dominate something but to remain always free and not be subordinate to any law. The Fool is always the beginning and the end of any quest or journey.