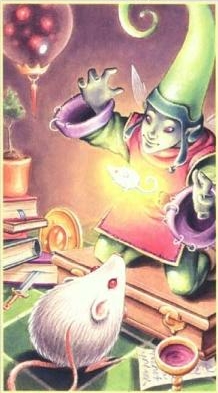 Will is what leads man forward on his journey towards understanding; to learn to act and to bend reality to do what he wishes and desires. The Fey that presides over will has abandoned any ambition within himself. He is moved by joy and not by pride.
He has observed reality and in the real art of magic trusts his desire to change things. However there is no malice or domination over other creatures. The Magician begins the journey towards knowledge with an infinite thirst to learn and to try every thing. He traces life, like the hand of a blacksmith feeling the metal under his fingers, a painter preparing colours, or a mother raising her children.
He has great power in his hands, and yet it remains a small echo within the universe.

In his own place, the Fey that incarnates the Magician has reunited the four elements that comprise the world. In a chalice he has collected the red nectar of all the emotions. In a sharpened dagger he contains the wishes of the Wise One to divide, comprehend and indicate. In a disc of precious brass he has enclosed the perfection of each thing brought into existence. In an ancient plant, though small, he has placed the desire of each thing to grow and live.
Humbly on his knees, he places himself before his real family, and because he bends down he is not large in either dimension or consequences, but important, and this requires a lot of attention and detail.
The mouse is white, since all elements are in its light and its eyes are red, twins to the fire that shines in those of the Magician. Above the Magician a lamp of a thousand lights becomes faint in front of the power of the Magician.
And here, between his hands, while a smile widens on his young face, is the image of the creature that will be created. It is still a reflection, an echo of the great life, because the Magician cannot substitute the force of creation, but it is already coming alive and moving its tail.

The Magician represents the first card on the journey towards 'illumination'. At one time he was enriched with frivolous things and the smallness of his figure, but the tarots of the last century transformed the Magician into a courageous man attempting the quest for the secrets of the cosmos, and therefore gave power to this card.
On the Magician's card, the four symbols of the suits are present, as forces of all types meet and balance in this figure. For this reason the Magician is the representation of will. Only through his intervention and his control of magic can these forces run together and create, without losing themselves in confusion.

The chalice, the disc, the sword and the tree recall the four suits and the four elements. The Magician draws from every force for his magic and bends all of the forces to his will.
The books indicate how the power of the Magician has its roots in tradition and in wisdom and does not come just from him alone.
The Familiar (a spiritual attendant, here in the shape of a mouse) indicates the wonder of the world that the Fey Magician is in touch with. This is reality.

The Magician also signifies the man who brings his spirit before great and immense things. He needs to have great ambition and great courage to dare place himself beside Nature, and for this reason the road he travels is dangerous. If he realises his intention to dominate and covet things, his road will be short and treacherous. Only with the real joy of creation and of learning can he overcome the perils of pride.