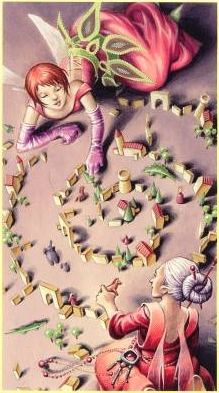 Everything turns, time turns the seasons and the alternating fortunes of man.
The wind turns and destiny turns, and everything is created and falls apart. Nothing in the material world is forever. But once the loss of things is accepted then new things are born and change and evolution is accepted.

Like two children intent on playing, two mysterious Fey are seated on the floor of an old room.
The first Fey is young and impatient, with a sweet face and untidy hair. A belt of spring flowers is tied around her waist and she is lying over the top part of the spiral wheel.
The second Fey is elderly, with long white hair gathered in a bun behind her head. Her face is serene but severe, and autumn rests on her clothes. She is sitting quietly behind the wheel.
The Wheel, an immense spiral, stretches between the two Fey, beginning from the centre. It is made of trees, objects and animals, like a game, but it is the wheel of the entire existence, in the hands of the two kind Fates, Norns or Parcae.
The first hand builds and creates, widening the spiral, little by little, irresistibly, but the second hand takes pieces away and places them to one side with the same irresistible speed. The wheel therefore changes shape and substance without ever moving. The piece that was placed to one side returns to the design and is again removed.

The wheel, the supreme card of circular symmetry, shows the alternations and vicissitudes of life.
What is made is destined to be destroyed, and when it is empty it is time to be refilled with new strength and new energy. This dance is not obscure or gloomy, but silent and yet full of joy.
Within the wheel, space can be found for destiny, and for acceptance that things go as they must. There is also space for the realisation that after many bad things it is inevitable that good things occur, and that once the bottom has been reached one must inevitably rise up again.
It is a small warning against pride because everything that we have as opposed to what we are is not eternal and sooner or later will leave us.
Last but not least the wheel contains the running of natural time, the seasons that follow one another and then begin again, just as the earth revolves around the sun, orbit after orbit.

The luminous leaves indicate spring and its creative force.
The young Fey indicates the freshness and spontaneity in creating and giving. The elderly Fey indicates the solemnity and severity in taking and in ending. The three-fingered amulet represents the three Fates, or Parcae, from ancient mythology.
The rosary belt around the waist indicates the memory of all things that pass. The toy houses indicate things, objects and minerals.
The toy plants indicate plants, places and vegetable matter. The toy animals indicate life, nature and animals.
The spiral wheel indicates the eternal expansion of the spirit.


In antiquity, the Celtic population were subjects of the Roman Empire and made offerings and blessings to the three Fey, who were no other than the three Fates, or Parcae, who safeguarded destiny. For the ancients, destiny was a thin thread that unwound and was then finally cut. Leaving aside the meaning of this card, one thing to ponder is how time works on the Spirit. All things pass and yet the finger of time has not touched the most profound part of what it is to be human.