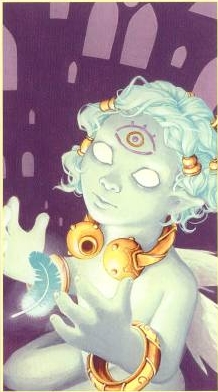 The Fey of Justice is a child Fey. What eye could see the truth, beyond any deceit? What mind could support the weight of decision and choice? What hand could hold the heart of man?
Justice gives order to things and gives them meaning. Without consequences, each act would be useless and justice is the force that links each cause with its effect.

There are many doors, arches and pointed windows lost in the confines of this immense room. The child Fey is pale, like ivory under the light of the moon. Her skin is smooth and there is no sign of wrinkles. Her hair is white and braided, leaving her forehead clear and showing her large white, trusting, but blind eyes. A painted third eye shines on her forehead, because she does not lack her senses. However, what her eyes can fathom is not what others are able to see. Between her outstretched hands a suspended feather shines, extremely light in the immobile air.
The child Fey is nude, clothed only in heavy gold jewels: they tie her plaited hair, decorate her neck in a golden yoke, and encircle her arms in a heavy gold bracelet.

Justice, necessity, responsibility, consequences of an action or an event, what must be, what must happen, discovering the truth, revelation of a deception, compensation and punishment.

Justice is not the law. That belongs to the material world while this is the justice of the Spirit. All things have consequences and it is not for us to say what is right or wrong for others and to judge them.
Nevertheless it is the road we take that leads to punishment or reward, because this is the nature of things. When the card of Justice appears it is because that moment is near, or at least right.
There is a great and profound innocence in the Fey Justice, since her heart is empty of malice and pure as it was at the beginning of everything. Free yet a prisoner, as her load is heavy. She has sacrificed her own sight to be able to see beyond.

The many doors indicate the shadows and false justice that try to confuse issues. Her white skin indicates the solitude and isolation of the Fey (like the seers in the temples in ancient times).
Her blindness indicates a lack of attention towards material things, which others maintain to be of importance.
Her third eye indicates second sight for things that are eternal and that are really important.
The feather indicates the heart of man being judged (in Egyptian mythology Anubis chose the worthy by weighing their hearts against a feather. If it was heavier than the feather they were condemned).
The heavy ornaments are the glories that chain us. They are the links between the ethereal and the abstraction of justice and the material world where this is applied (they were inspired by the ornaments and jewellery used by West African populations).

Justice is the fulcrum that gives order to the universe. Placed in the exact centre of the deck, the number 11 gives meaning to things. If there was no superior order nor any spiritual justice (removed from any ethical characterisation), all would be chaos and disorder. Furthermore, Justice is the first card that is connected to the spiritual world and not to the material world.