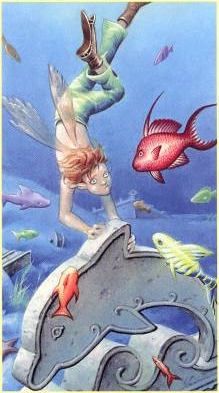 When two worlds are turned upside down, one within the other, when what appears strange becomes normal and what was normal becomes strange. This is the Fey of the Hanged Man, the Fey of the upside-down.

In a profound abyss in the ocean, where there is no other light except that from a distant surface, a few ancient ruins from a forgotten people emerge on sands undisturbed by any currents.
Fish of every size and colour inhabit this place and all turn with curiosity towards the intruder from the surface. They swim to him without threat, in silent questioning.
The hanged Fey is holding a stone dolphin which is depicted while frisking above the water. Head down, legs crossed aiming at the surface, but his arms are anchored in a new grip. His face is contracted from lack of oxygen, as this world is strange and hostile for him and he would not be able to remain here for long. Yet he resists and his eyes draw close to the largest and boldest fish.

Difficulty, trial by ordeal, sacrifice, change of perception, meeting different realities, moving to a different or superior understanding, understanding diversity, noting something that was hidden although visible.

It is not easy to immerse oneself in the depths, in apnoea, holding one's breath for sufficient time. Yet it is the only way to enter into contact with another reality, to understand different languages and forms.
The hanged man, without renouncing his own world and identity, has dived into another world, with the intention of understanding and discovering. Just like that, with his head down, he is a bridge, a link, an umbilical cord between the two worlds.
And what he discovers is not so strange. The fish are not enemies or indifferent, and they look at him, also curious and friendly. Although it is difficult to hold his breath, he has discovered, in the eyes of a much feared enemy, the same look of understanding and friendship. The dolphin statue that he grasps is the second part of the link. Perhaps the dolphin is also upside-down, symbol of great intelligence yet without hands or works, but above all a symbol of the inhabitants of the sea who emerge and dive into the air.

The ruins indicate the mystery of the things we ignore.
The upside-down positions indicate how we need to alter our perceptions at times and to put our heads down.
The contracted cheeks whilst holding the breath indicate the fatigue, the difficulty and the inevitable transitory nature of this condition.
The eyes meeting indicate a possibility for translation and understanding among ourselves and different cultures.
The dolphin indicates, that other forms of intelligence, even though diverse, can open our own minds.
It also indicates how the dolphin is 'hung' in the water, with respect to the air.

In old decks, this card indicated a terrible ordeal, an initiation rite to reach greater understanding. The Fey do not have crude habits like those of man. There remains however a strong desire to see each place and thing and to surpass the limits. The difficulty and the fatigue pass, but what was observed while the head was upside down remains with us. With the number 12 this card is balanced between the world of the spirit and that of the intellect, and therefore rarely refers to an exploration or a physical fatigue. The dolphin also recalls one of the artist's soft toys that sleeps on her bed every day.