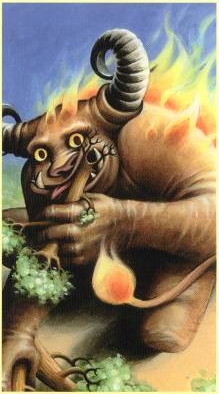 An enormous beast. guided by its voracious instinct, devouring everything around it until nothing remains. A stupid beast, enormous and cowardly that eats, consumes, devours and does not understand. This beast can do no more than remain alone in a desert of ashes.

An enormous giant of fire and clay burning in the forest. Immense and curved horns adorn a huge head where little fiery eyes shine without intelligence.
Its features are brutal and its lineaments are bestial.
It constantly carries entire trees, still green, to its mouth, which it devours whole, while crawling on all fours; with the other hand, it uproots them from the ground. Wherever it has passed bare earth and leaves remain.

The devil incarnated, evil, danger. The evil is however more a lack of judgement than malice or spite.
The beast has lost its Fey nature. The fire that it makes is its terrible hunger and without aim or design it continues to eat.
The evil turns against itself. As much as it could possibly appear to he beautiful it remains a greedy and voracious beast, simple and instinctive, that has drowned its spiritual potential to satiate its hunger and its impulses.

The fire was chosen as a symbol of strength that needs to be fed in order to remain, and for its destructive characteristics.
It is also a symbol of the guiding instinct.
The tongue is greediness and incessant, insatiable hunger.
The trees are the beautiful things that the beast crushes in its stupidity.

The devil in its many forms is seen as evil, either dangerous, treacherous, ferocious, cruel, deceiving or tyrannical. The evil in a spiritual sense is that which distances us from the growth of the spirit. It is avid, lustful, greedy, proud, slothful, angry or jealous (the seven cardinal sins)... but in the end it is just incapable of looking beyond and realising the value of things.