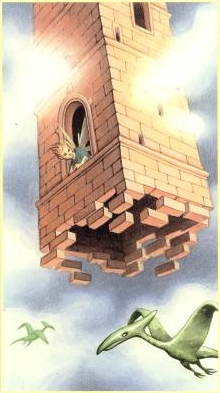 Things that were made one day are no longer. In as much as things can be trusted to time, it will devour them slowly and make them disappear. This is not a cause for anxiety, but of understanding the ephemeral, because everything vanishes: this does not mean it was in vain. The Fey closed in the tower watches the foundations of her house collapse and accepts that the world, today, is greater than her, and laughs.

A never-ending tower descends from the sky. Its foundations are not on earth but in higher and more secure sources. Its feet, those of an ancient colossus, are crumbling and open the way for the inhabitants of the air. Bit by bit the tower fall; apart and abandons itself to the sky. From a window, a Fey who lives in the tower watches it collapsing while looking at the world below. Soon the barrier that divides her from the rest of the Universe will dissolve and she will be able to fly free.

Imprisonment, closure, ruin, arrogance that comes back on itself. Destruction of something, collapse of certainty, of habits, of confidence. Defences that fall, walls that shatter, doors that are flung open.

The tower returns to the difficult concept of pain and of loss. The basic symbol recalls the ancient tower of Babel, where the will of man was, opposed to divine will and man was obliged to learn his limits. Over time the tower has become a symbol of imprisonment and pain. On the one hand, it means withstanding the violence that infringes our spirit. like rocks against the waves. On the other hand, it symbolises the erecting of barriers and fortresses that protect from the outside. and seeing them finally fall.
There are moments when everyone needs to hide in a tower, to be closed within oneself and one's things, but these moments must pass, and man must know how to return to the cycle of life, to give and to receive. The moment, when it arrives can cause problems if one is not ready... but in the end it is necessary in order to continue growing.

The quadrangular, rather than circular, tower indicates the artificial nature of the construction and its difficulty in harmonising with the rest of the world.
The cloudy sky indicates the possibility of an evolution, either good (serene) or bad (storm).
The teradactyls indicate our fear in leaving the tower and at the same time indicate that the empty sky is actually inhabited and alive.
The Fey at the window indicates that it is necessary to accept the knowledge of collapse.
Wings allow the Fey to fly.

The tower is drawn in such a way that it appears to come from the sky and not from the ground. This is because the foundations of man are always spiritual, not just material, and the force of time is unable to corrode that. All that we posses, even in terms of friendship, love, understanding, and health, can be placed at risk, but what we really are is untouchable.