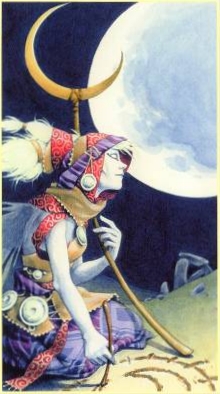 Docile note of power. Hear the little sister of the skies who talks and whispers of ancient mysteries. The hand of the Moon Fey moves to this song and traces the secret signs. The invisible is transformed into the visible and what was known disappears, covered in sand.

In a desert with no name, the moon shines huge and white yet non-threatening, giving a spectral pallor to everything. Forgotten stones of temples rise from the ground and the Fey searcher of dreams, raises her head to listen to the soft song of the moon. Her hand holds a pole with a lunar scythe at the top, held as if to reap the moon itself. The other quickly writes in the sand the signs that come to mind, guided by instinct and by the suggestions of place and time.

Dreams, illusions, intuition, the worlds of the invisible, magic, female power, the hidden side, the receptive side, the soft side, the silent side, quest, transformation, inconstancy, capricious.

The Moon is the Arcana parallel to that of the Sun. In remote times, the moon was always connected with magic and female power. When the sun stopped shining and normal men went indoors, priests and sorcerers officiated in secret under the eye of the sky: the moon. Even today the moon contains infinite mysteries, like a civilization buried under the sand. The Moon Fey is a sorceress, powerful and sure, who moves alone, following only her Mistress and her instinct.
The essence of the moon is so magical that at times it does not seem to be connected to reality, almost like a mantle of illusion and inconstancy that wraps around its being. In this space, dangerous if one does not have sufficient strength to resist the allure of the night, the most beautiful feelings can be found, the craziest things never seen before, the shame never spoken of, the sweetest and most unreal desires. The real difficulty, as sorcerers know, is not to enter this place but to leave without losing oneself and abandoning oneself to being unsubstantial.

The full moon indicates the moons great force, its maximum potential and pale splendour.
The huge moon, close to the earth, indicates its weight in matters and the energy that can be got from it.
The bent pole indicates the inconstancy and transitory nature of the world of dreams and of the moon.
The point with the lunar scythe indicates that man must turn to the moon and not abandon it.
The white body indicates how the Moon Fey is used to the pale heat of the moon rather than that of the sun during the day.
The clothes are those of a traveller and of a seeker. The circular jewels recall the lunar disc.
The little sticks she writes with have no tips, indicating the instinctive nature of her gestures.
The signs traced on the earth show a moon and a sun together. A pale light seems to shine from them.
The ruins in the distance indicate both the allure and the fear of the dream world.

Once again the Sun and the Moon meet in two worlds, masculine and feminine. They do not fight or oppose one another in any way. Rather they divide the day and the night. There are spaces where the moon rules and the sun is only a memory, and other spaces where the sun is the only light and the moon is slender, waiting.
Only with this reciprocal harmony for the other's space, can male and female beings possibly grow. Due to the nature of the moon, it is also a mystical Arcana. It is futile, even in bad taste, to try and rationalise its significance too much. The moon is instinct, intuition and nothing to do with reason or common sense.