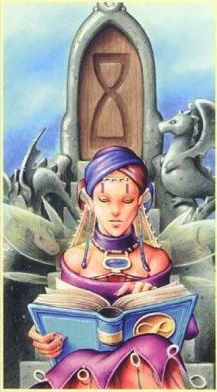 The doors that Iead to understanding are numerous. The Fey that guards these doors is called the High priestess and protects all that is, was and will be. Her eyes move patiently and her long hands trace words in an ancient language. To guard and to preserve are her roles so that the wisdom of the Fey is not lost. All those who are looking for answers, and know how to ask with courtesy, turn to her, because it is difficult to learn real wisdom.
The Fey Seer is the lady of the threshold and guards its opening and closing.

The Seer sits on a staircase of stone suspended in the heavens. At her back a simple door leads elsewhere. A simple glance cannot reveal what is to be found on the other side, nor guess it, unless the door is opened. On the door the symbol of time is inscribed, as knowledge has no limits. The Fey holds a heavy book on which shines the glyph of infinity. Her hands interrogate the knowledge that is contained there, while her grave and severe face is turned towards knowledge. At her back two stone dragons guard the threshold that separates ignorance from knowledge. One of these comes to life and, like playing a game, twists his head to be able to read behind the Seer.
A veil covers the back of the Fey's neck and whoever looks through this will recognise the difference between reality and illusion.

The Seer (or High Priestess) is known in older tarots by the name of "Papessa" and signified Faith. For the ancients, Faith was to give oneself to God and therefore to reach an understanding of the revelations and the truth.
The process of learning is always a threshold. preceded by a stairway. The climb is hard and difficult but the reward is great. The Fey of knowledge sees into the present, as well as the past and the future, and dispenses the wisdom she knows, because only a strong heart understands how to carry the weight of knowledge. The dragon indicates that often the road towards knowledge is full of simplicity and curiosity.
For many reasons this card also indicates the truth. At the top of the interminable stairway, the veil of illusion and of deceit disappears.

The stairway represents the difficulty that needs to be overcome to learn. The stone indicates that truth remains constant and does not change.
The sky indicates the solitude that one brings to these places, in that knowledge is personal and each person must walk the road in his own time and manner, in accordance with himself.
The hourglass indicates time and the mastery that knowledge gives over the time that runs.
The sign of infinity, on the contrary, indicates how time has no meaning in front of the Spirit.
The dragons are the guardians of the door, pillars that need to be crossed before passing over the threshold.
The books are infinite knowledge.
The veil is the illusion that separates the reality of the Spirit from the perception that we have of the same.

The Seer is a card closely connected to that of the Wise One. In other tarots they appear as the High Priestess and the Hierophant. She has therefore a strong female nature, and at times is used to indicate the love that is born not from flesh but from respect and esteem. If one observes the timeless face of the Seer, it does not look cold and hostile, but almost sad, because things pass and she can do nothing to keep them. And yet her profound eyes do not look with ill-feeling towards the dragon, who in his ingenuity draws closer to her book.