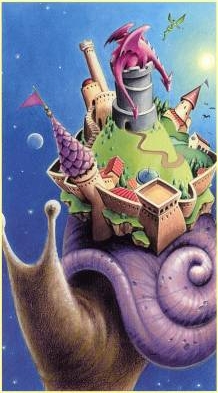 Everything is composed of many parts, yet it is also something whole. If it is divided it loses form and substance, but when it is really whole it becomes something totally different than the sum of its parts: it is complete.

This is the universe and it includes galaxies, stars and planets. Immense in this universe, there is a snail, on whose shell rises a mountain .... on the mountain a castle, on the castle a tower, and at the top of the tower a dragon.

All, completion, complementarity, the comprehension and union of opposites. A good end, joy, happiness. peace, serenity. A prize, communion with what surrounds one. the spirit of the world. Water and wind.

The World is the card that contains everything. This completion is extended to material aspects, to intellectual and spiritual matters, to everything. And all of the distinct elements which compose it are in harmony with each other. It is difficult to think of an Arcana that is more positive, stronger or more indestructible than this one. Precisely because of its completeness, the World also represents contact with the divine and the need to harmonise one's energies, desires and actual abilities in a unique space.
There is an old Japanese fable that describes the world supported by four elephants on the shell of a turtle that travels through infinity. The world of the Fey is a world of magic, of courage and wonder, where things exist without needing a reason to be. A world made of substance.

The snail carries the world like a house and reminds us that the world we live in is alive and moving. It proceeds slowly but constantly through the universe, which is even greater.
The mountain, the castle and the dragon all indicate living things, constructed things and things that are outside man's control. They are also symbols of the intellect, matter and spirit.
The circular geometric shape indicates the relationship between things and the cyclic nature of existence.

In order to look at the world one needs to he able to remove oneself from individual perceptions. Each individual Fey is lost when faced with the complexity and the impressiveness of all this, especially when together. Nevertheless, the conquest of knowledge, the journey that began with the Fool, ends with the World. Here it is possible to reach infinity (not in the same way as with the stars, which are perceived for an instant). to have it at your fingertip,: not to 'possess' it, but to 'be' it.
One of the most beautiful concepts repeated in this card is that whilst being a part of the whole, each single part is also the whole. A little contradictory according to Aristotelian logic, but nonetheless a key concept to understanding the beauty of this Arcana.