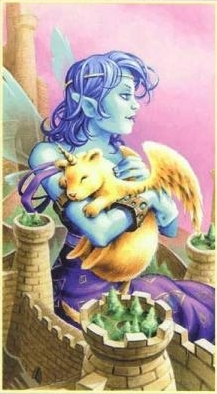 The dominion of the earthly world is governed by an alternation of the powers. Just as the moon rises and then falls and as the day becomes night to return dazzling tomorrow, the Empress governs half of the dominion of things. She governs between earth and sky. In her arm, strength; in her face courage, in her bosom she cares for and loves all things that are born and grow. She is mother and mistress; the infinite generative force.
The Empress is power born from life.

Tall, white towers stand out against the sky. Interminable forts and bastions, but with gardens at the top of the pinnacles, which are covered by trees and grassy pathways. All this immense fortress is the Empress's throne. She wears no crown but a simple thin headband of gold, and no other ornaments apart from two bracelets of ancient wood and stones the colour of her eyes.
She does not hold a spectre in her hand but has a puppy in her lap. This animal lives only in the world of the Fey and is the symbol of the Empress. Its fur is golden like the rays of the sun at midday: the horn on its head represents purity: its wings signify liberty and finally its powerful paws give it force. Nevertheless it is still small, embraced within the Empress's loving arms.
The Empress does not look at the things nearest to her. She is free, in command, and sweeps the horizon and the future with her glance.

The Empire, or rather the responsibility to command and govern can he handled alone if the Emperor or the Empress, the male and female principles, are in agreement. If this occurs, the earthly world benefits greatly and is at peace. The power of the Empress is nevertheless very different from that of her consort. As a woman she possess the capacity to raise things and to protect, and her world is rich and blooms. It is not surprising that she is seen as a Mother Goddess, but she is also a counsellor and as strong as the ancient mountains. Her expression however shows that she is not a servant but rather knows how to look ahead and to think of herself too.

The towers indicate the material world, the events and the things that occur to men. They are her throne and dominion.
The gardens indicate life and the immense vital force that emanates from the Empress.
The golden band indicates a queen's royalty but also the simplicity of her mission.
The winged unicorn indicates the attributes of power: purity, liberty, strength, justice. It is still a puppy, since the Empress is the force that generates and raises things, a morning strength, not of the evening.
Her coarse wooden bracelets show how the Empress must at times be a warrior and these link her with the earth.
Her glance turned to the horizon indicates that she is free from all things and does not serve anyone.

Two concepts find harmony in the card of the Empress: the act of governing and femininity. This first of all leads to the generative force in the maternal womb, but is not limited to this. It is not glory or vanity that she looks for, nor to be the submissive figure at the heart of a family. She is a giant, immense and free and audacious, whose glance embraces the world. There is the strength in her to move mountains, but this is not aimed at war but at creation and the care of all small things.