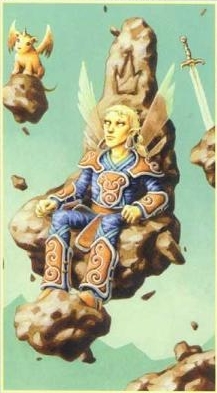 The Emperor is lord of the material world. The sun at its zenith crowns his head, as all things respect his wishes.
He completes the Empress and is completed by her.
His arm bears certainty and inevitability. He is the incessant guard, the tireless vigilant sentinel of the world that is entrusted to him. He looks across the hills and woods, eyes and flesh at the heart of things. He exercises his dominion guided by necessity and need, not by ambition.

The master of all things is seated on a throne suspended in the sky. The throne is rough stone, engraved and eroded by wind, not by artisans' hands, but it is admirably adapted to his figure. No crown adorns his head, because the sun that reflects on his face surrounds him with light. A three-pointed crown is engraved on the throne, a little above his erect head.
The throne, in as much as it is solid and heavy, floats in the air. raising and levitating the lord above everything.
Decorated armour covers his body - back, chest. arms and legs - but his gaze is fixed on the sun in front of him, without vacillating or hiding.
On a rock to his left an unsheathed sword is planted, which indicates the power that his arm brandishes. On his right. on another suspended boulder, is a winged unicorn, symbol of his command and the link that he shares with his consort.

As with the Empress, the Emperor possess only a part of the dominion. Only if he governs in harmony with his consort will there be peace and well-being. In this card, as in the previous one, the missing part assumes a power equal to that present, until both are present.
In the heart of the Emperor is the masculine principle of dominion and of government. He is more distant and cold, more aristocratic and powerful, but his face is equally young and beautiful.
Pride is one of his defences, as the burden of command weighs on his shoulders and he is always ready for war and conflict. He would like to descend from his throne but cannot until his job is completed. He is the Emperor and Father. He keeps watch on the world from on high.

The stone indicates the link the Emperor has with the earth.
The roughness of the inscriptions signify that the dominion of things has been entrusted to him from Nature and not from his subjects or from his power.
The stone, heavy as it is, is free in the air indicating how the dominion of the Emperor in the material world is born from the spiritual and the mental world. The three-pointed crown imprinted in the stone recalls the three worlds: material, mental, spiritual. The branch higher than these three points is the limit of the lord's power.
His armour indicates how the lord Fey is the shield of the world against evil. The sword is the power of the Emperor, now appeased and at rest, but always ready to move.
The winged unicorn is the symbol of his power and of the love that links him to the Empress.
His white eyes that do not close in front of the sun indicate that he is not afraid of the truth.

Comparing this card to that of the Empress. his coldness emerges. Where everything with her was sweet and warm, here it is bitter and crude. This is the masculine nature perhaps, to be at a distance and to be more preoccupied by abstract and invisible things rather than the grass that grows beneath tired feet. For this reason the Emperor and the Empress have need of each other if the Kingdom is to prosper. Where she uses instinct and intuition, he possesses wisdom and intellect. Where she acts out of love, he acts from necessity. The roots of their love are profound.