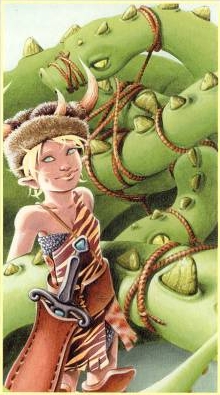 The Fey who makes a display of strength will be neither great nor powerful, because true strength is not shown off. Strength hides from eyes and laughs, while standing up to enemies and subduing them.
There are no secrets behind strength, as it is clear like a mountain stream and raging like a rocky waterfall. And yet. even though there is much strength in those hands. they would count for nothing if the arms and fingers did not also know how to be gentle.
There are many things to deal with. some insidious, but many great, terrifying and powerful. There is always a need for strength.

A minute Fey. dressed in the skin of a strange magic animal, has just won a battle against an enormous dragon-serpent with many heads. At her side shines the hilt of a sword almost as big as her, which has however remained in its sheath fastened around her slim waist. Her eyes are limpid and clear and her mouth is cheerfully smiling. Her shape is still immature, adolescent and childlike. On her head, from a hat made of fur, horns and tusks emerge like ornaments, from wild beasts more dangerous than the one she has just captured.
In a tangle of shapes and spires, ensnared by a long thin rope, a terrible monster struggles in vain: part-dragon, part-serpent, with numerous heads. The child warrior has seized it firmly by the tail and ignoring its protests and its enormous height. she sets about taking it away.
The monster's eye is not angry or evil, but stupid and defeated by the courage of its enemy and by its own impotence.

Courage, force, energy, constancy in adversity, triumph against a superior enemy, the triumph of good over bad. justice against falsehood, reason against brutality, laughter against silence.

The origin of the icon for strength showed a young girl opening the jaws of a lion, a simple representation of the force of reason and intellect against that of instinct and brutality. Whether the enemy is within us, or outside. strength is always the good that defeats the bad: Saint George who slays the dragon; Thor who raises the serpent Midgard from the earth...
In the world of the Fey, Strength is important, and the Strength Fey is a true invincible warrior. But she is not calculating, nor does she possess any cruelty. Just as once the young girl infringed the jaws of the beast with her purity, the strong Fey does not brandish a sword to stop his enemy or dominate him. Strength also means an outlet for joy and energy from apathy, and from the silence of weariness. It means finding lost things and never giving up. It means trusting in good and in oneself: feeling sure when things seem terrible that it is only a small thing in comparison to the resources of the Spirit.

The Sword indicates the limits of strength. According to the oriental masters a real warrior never kills. For this reason the sword remains in its sheath, even though carried by great Strength.
The tusks in the hair indicate that this enemy is not the first and will not be the last.
The rope, which is very like the tail of the dragon-snake indicates that evil often turns on itself.
The two heads show how evil never comes alone and that everything needs to be faced to win the duel.
The dimensions of the Monster indicate the terror that obstacles place in front of us, and how fear is often the real enemy.
The seizing of the tail shows that the evil of today can be dominated and become part of the strength that we will have tomorrow.

Until the beginning of the 20th century, Strength was the eleventh card, then different decks exchanged it with number 8: this was the sequence followed for the Fey. The card that is now number 11 is Justice, also a Fey child. Perhaps Justice and Strength are not so far removed from each other.