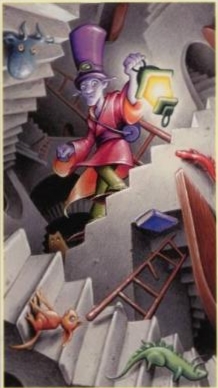 A lost Fey is looking for the path. He finds himself in the place where all the lost and forgotten things are gathered. There is doubt and guilt, but also memories and joy.

The light shows the shadows and the routes that lose themselves elsewhere. But it is the light of the Spirit that illuminates the way and that keeps us safe from any danger.

The Fey who searches, wanders in solitude, but he is not afraid because he will find the way.

A labyrinth of many shapes on various planes, of a confusing and impossible geometry that winds in every direction. Within it there are abandoned stairs, doors and hidden, secret spaces.
With careful but sure steps a slender Fey opens a road in that maze and looks for the direct path. His tall hat holds a gem like a silent third eye, and he extends his arm towards the darkness to distance it.
Strange and timid creatures live in this forgotten place, but they do not flee when faced with the light of the Hermit; they use it to observe for the first time the features of the place they live in and to marvel at its secrets.
A closed hook is placed on a ceiling-floor, just hidden from the view of the searching hermit but within the circle of his light.

The Hermit has chosen to separate himself from the other Fey and to reach the crossroads of infinite possibilities. Here it is easy to lose oneself in the darkness of lies, doubts and fear. But the Hermit does not hurry and moves his feet slowly. He is looking. Not for light, because he brandishes that and with it removes ignorance, but for something else, which he keeps in his heart. There are many roads but he never gets lost. It is difficult, however, for those who wish to follow the same road. It is necessary to immerse oneself in things hidden, lost or forgotten, and risk losing oneself for something precious that was mislaid. Where all other lights fail, the Hermit is there to guide us, in solitude, to give strength when there is fear, a safe guide. In part it is our conscience that emerges when we are lost and alone. In part it is the guide who inevitably arrives to save us when we are lost in a hostile place.

The doors indicate the infinite possibilities and the infinite paths that open before us at any time.
The stairs indicate how the paths rise and fall and it is not always the downhill path that reaches the valley.
The creatures indicate those who are lost and are agitated without a guide in the darkness of solitude.
The book indicates the hidden treasure that is concealed within everyone.
The eye gem that is on his hat indicates the need and the desire to search and to meditate in solitude.
Finally the lamp indicates the light of the Spirit that shines strongly when we are alone and that guides us in our choices.

The Hermit is a card of solitude. It is not, however, a mournful and gloomy exile from company elsewhere but rather a reflection of those roads we must travel alone, and those answers that must not come from others. Growth, as we learn from infancy, whether spiritual, mental or even physical, is at times painful and dangerous, but necessary and rewarding.
The Hermit therefore is the card of internal quest and growth of the self.