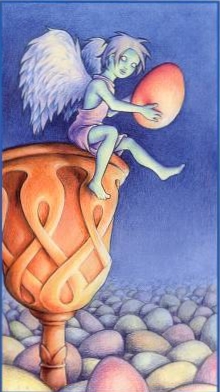 A small Fey with angel wings is seated on the edge of a precious chalice, which is delicately balanced on a floor of Fey eggs. The Fey is holding and playing with an egg, but is taking care not to break it.

The past, memory, turning back, a serene infancy.

This card brings us to a confrontation with emotions suggested by memories. In traditional iconography, two children played with vases in an old villa. Here a Fey plays with an egg, in a strange world composed of the past and the future. In fact the Fey was once an egg and the egg therefore takes her back to the past, and at the same time to the Fey of the future. The chalice, like a solitary tower in this place, is the link that connects the distinct times. Like a lighthouse it guides the emotions and prevents one getting lost in nostalgia. A parenthesis from reality.

The eggs are the past, infancy, origins.
They are also the future, desire, the potential that is in the process of being realised.
The game is the way whereby an argument, like time passing, can be understood and accepted.
The angel wings illustrate the Fey's total innocence.