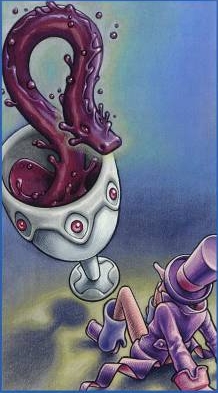 A strange Fey, dressed in an unusual manner, falls to the ground from fright, while the threatening figure of a dragon rises in the crimson wine from the silver chalice in front of him. Like a jack-in-the-box the dragon gushes upwards, but it is not ruthless, only strange and wonderful. A unreal light envelops everything.

The emotions consist partly of illusions and lies. Daydreams often lead to a rude awakening, yet often it is hard to distinguish them from reality. Such strongly vivid images that cannot be ignored do not allow man's spirit to control them and absorb them tranquilly, but generally affect and frighten a person tremendously. We also need to be careful when we are dealing with the emotions of others. Still waters run deep.

The dragon spurting out is the symbol of all the illusions and surprises.
The unnatural light indicates that we are dealing with dramatic illusions, but not reality. Understanding needs to be regained.
The fall indicates the senses that have been momentarily lost.