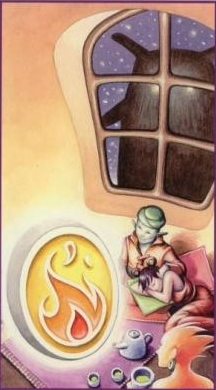 A simple country house where diverse Fey rest and are protected from the inclement weather outside. The pentacle that protects them is also the fire and the hearth. They in their simplicity are rich, but a shadow of monstrous appearance is approaching the large window. No-one knows if this strange figure is a threat or a small furry animal trying to find refuge and warmth.

Poverty, destitution, exclusion from what is beautiful (one's own or otherwise).

This card has a double meaning according to whether you look from one, or the other, side of the window. The outside shows poverty and no fire or shelter; a symbol therefore of major lack. However poor one might be, though, there are people who have much less.
If seen from inside, the card is an echo of the previous card. The fear of losing what one has must not be transformed into blindness and avarice. We need to know how to accept what is foreign and diverse. We need to accept, share, and look without prejudice.

The flame of the pentacle indicates heat that springs forth from the hearth of the refuge.
[This is not a proper symbol but is relevant to this section: when I had to describe to Mara how to depict the threatening shadows outside the window, I said: try to imagine Pikachu, from Pokemon, seen against the light. It is incredible where inspiration for Tarot cards might lie. Author's note.]