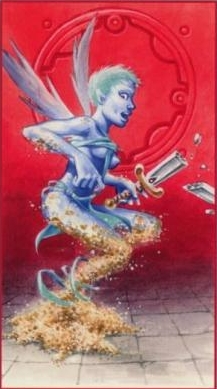 In front of a mysterious symbol, a Fey disintegrates and changes into sand. Her sword breaks and shatters, and everything crumbles.

This card seems to bring only negative symbols and inauspicious omens with it. Nevertheless, it is exactly in such moments that it is necessary to look carefully for the hidden meanings and nuances in meaning. It is not always possible to win. At times we lose and are defeated, but this is only a new beginning. A Fey can never die, unless she wishes to do so. She is transformed and her essence remains in other things. This card also indicates the end of conflict and of the destruction of those who do not know how to stop. The seal on the wall is truth and the end that destroys anger and dark passions.

The sand is the symbol of time. It indicates that all things have an end, ours and those of others, whether powerful or weak.
The sword that breaks is the conclusion of the battle and the end of pain. Red indicates the threat one feels, and also indicates that it went too far. The seal is truth, the external intervention that completes everything.