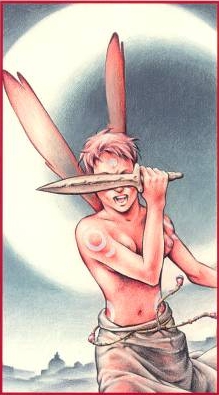 A Fey moves decisively, brandishing two flint blades. The first blade is held in front of her eyes in order to obscure sight and to allow the spirit to observe. Conflict and latent violence can be perceived, but it is still under the control of the will. In the sky behind her is an enormous crescent moon.

A duel, a moment of truth, to deal with one's fear. The rules of conflict, the honour of war. The ability to isolate the senses and perceptions of one's own emotions and know how to regain lucidity.

Often the Two of Swords is depicted as a blindfolded woman who offers the blades to two duellers. The concepts of justice, ordeal, ritual duel, are implicit. In normal life one rarely brandishes a sword, but equally we are often subjected to currents of violence and struggle. This card represents our ability to isolate oneself from conflicts, to remain impartial but at the same time not to be indifferent. When violence surrounds us, but is not caused by us, we need to know what is really happening and not take part; at the same time we must not ignore it or flee from it.

The colour red indicates the conflict between passion and instinct and the need to be lucid.
Covering the eyes with the blade indicates a ritual gesture, a return to judging with one's inner senses.
The two blades are indications of equilibrium and our ability not to take sides. The enormous crescent moon indicates the influence of the emotions, which put pressure on a situation.
The circle on the Fey's forehead indicates the interior vision that needs to be opened.