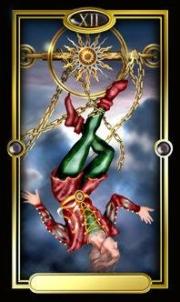 More than any other figure in the Major Arcana, the Hanging Man resembles the Fool. By turning himself upside down, by behaving in a manner not consistent with society, the Hanging Man may be judged a fool by many. The difference between the two is important, though. The Hanging Man has come through a challenging experience that gives him a sense of peace and understanding that only people who've successfully faced great trials can have. The sun represents his vision of himself and his place in the universe. He may flounder at times, but he knows who he is and from whence he gets his strength. He is willing to sacrifice society's approval in order to be true to himself.
The message of the Hanging Man is knowing when and what to sacrifice. Be clear about who you are and let all your actions and decisions hang from that vision. Even if your actions feel clumsy or out of sync with others, sacrifice their favorable opinion rather than be untrue of yourself. Do not put more stock in what other people think than in what you believe to be right.
Be aware of rationalizing bizarre or inappropriate behavior by saying you are just being yourself. Are you really? Or are you looking for an excuse to misbehave while feeling noble about it?