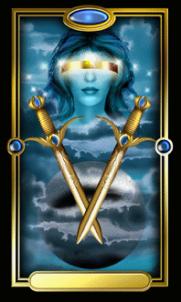 A woman is blindfolded by a golden band. Two swords cross in front of the moon. The woman is experiencing conflict between her intellect and the less rational, intuitive aspects of herself. Ironically, her face seems calm, as if she is unaffected by this conflict. Perhaps she has chosen to be blinded to this situation. Unlike the High Priestess, Major Arcana II, this woman does not dance elegantly between intellect and intuition. She is unengaged, making no progress. The battle between head and heart remain unresolved.
You are faced with a decision and you aren't sure what to do. You have to decide. Remove your blindfold and look squarely at the situation, most likely you know what to do but are afraid.
Be aware of ignoring the situation for too long. Pretending it isn't there won't make it go away.