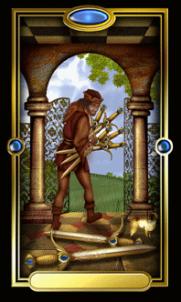 A warrior stands victorious, carrying five swords. The dawn breaks, revealing the battered remains of his opponents. The defeated figures in the background do not emphasize the warrior's glory. Instead the image suggests a Pyrrhic victory. Although there is clearly a winner and a loser in this battle, it is not clear that the cost of winning was worth it. The Hierophant, Major Arcana V, speaks of the lessons of human history, among other things. War or any sort of devastating battle has its costs. Whether such means of control are always worth the effort is unclear. It is a lesson we have not quite sorted out.
You are at the end of a battle. Are you the winner or the loser? In either case, what was lost and what was won? Was it worth it? What have you learned form the experience?
Be ware of seeing battle as the only or the easiest way to solve disputes. The costs are high on both sides. Perhaps a more conciliatory approach would serve everyone better in the long run.