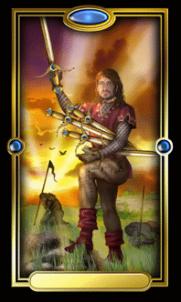 A shady character carrying five swords retreats from a building. He apparently intended to disarm an enemy. His plan, though, seems spontaneous and foolhardy. He cannot even take away all the swords. There is every likelihood that his action will so anger his enemy that one of those swords he left behind will find its way into his back. Unlike the discipline and willpower of the Chariot, Major Arcana VII, this character responded to his situation in an illogical and dangerous fashion.
You are faced with a problem. Worse than that, you are considering a poor plan for solving it. Reconsider your solution and try to find one that will yield a more satisfactory result.
Be aware of impetuousness. Your actions have consequences and you would do well to consider them before acting.