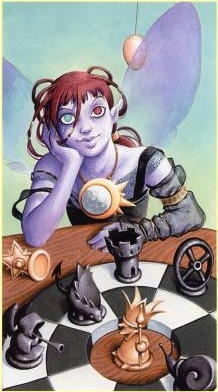 ln the end the principle. Death appears dark and black, terrible beyond the veil of our thoughts. When reached, it has a kind face, however, welcoming in itself. She is the Fey who has lived only once.
In death there is transformation, a passage. The end of the present moment, now past, is the beginning of a future moment, now present. It arrives suddenly, inevitably... yet like a friend long courted.
It is not the death of the body, nor that of the spirit: it is an obligatory passage, a metamorphosis.

She has two eyes of different colours. One indicates hope, and shines with light, where any other kind of light would not show. The other shines with an angry and dangerous light, because she is the great consoler from whom you cannot flee. Her face is kind and rested. She gazes with a friendly smile, patient and at the same time sad because of the fear she knows she inspires. She rests her head in her hand, waiting without haste for the last move to be made. Around her neck is a medal that shows an eclipse. The moon covers the sun and hides its light, precipitating the world into an illusory night.
She sits at a round table where a circular chess set is shown and a game is in progress. The Star has fallen and the white king is frozen with fear in the center. The black pieces are menacingly surrounding him: towers and wheels, justice and wisdom and finally the world. At her back a single egg is hanging from a thin thread, the only ornament in this room.

Death, as the name declares, is the card that frightens and terrorises. On many occasions the most common desire of those who reflected on this card was to distance themselves from the shadows and flee from the omen.
But in the world of the Fey nothing can really die because the spirit is immortal. Yet Death attends the threshold just the same. Things end, get lost and disappear. As an eclipse hides the sun's light. death describes all the times in which we emerge from the dark, before being immersed in another light.
It is therefore the metamorphosis and the transformation that occur and not the end itself. What we knew disappears. We need to recall that death does not give weight to status, riches, power or glamour. There is no announcement of its arrival. Yet nothing is left unchanged.

The green eye indicates hope and the red eye indicates danger.
The medal shaped like an eclipse indicates the dark and therefore the return of the light: the transitory nature of death and at the same time the fear that it induces. The circular chess set shows the relevance of everything.
The chess pieces indicate other cards in the tarot:

The face of Death was greatly influenced by Sandman by Neil Gaiman. When this card was still in progress I asked Mara to give it a face I could fall in love with. Nature has worked so that beautiful things do not induce terror and that in the beauty of the spirit there is deep promise and great trust. This card represents change in its novelty, in its hope and promises and also in the fear that it creates and in the uncertainty of not being able to see bevond it.
The egg indicating life and fertility, quotes from a fatuous painting by Piero della Francesco, the Pala di Montefeltro. This alchemical symbol, in a central position in the painting, was specifically requested by the Duke of Urbino as a lucky omen for his wife.