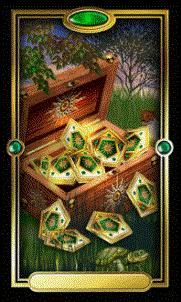 A wooden chest of pentacles lies under a tree. A ferret peers over the edge curiously. A turtle makes his slow way past, rather unconcerned with the whole affair. Whose chest is this? Why is it unattended and open? Aren't they afraid someone will take them? Evidently the owner isn't too concerned. Since this is a ten, it reflects the Wheel of Fortune, Major Arcana X, and the end of a cycle. Whoever owns this chest probably left if for someone else to find. That has a nice, unified feel to it; they left a chest of pentacles to repay the universe for the single pentacle given to them long ago in the form of the Ace of Pentacles.

You have reached the end of a cycle. You've learned all you care to learn, you've invested all you want, you're ready to move on to something new. Just as you received a gift to start off, why not share your abundance with someone else?

Be aware of holding on to things when you'll never use them again. The tennis racket was great while you played - now pass it on to someone new.