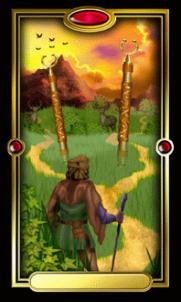 A traveler faces a fork in the road and a difficult decision. Outwardly, this card is reminiscent of the Fool. Unlike the Fool, he is conscious of the future and wants to make the best choice - not an easy task when the choices are so similar. The differences lie far off on the horizon. Which is better, the bright sky and huge mountain or the red sky and smaller mountain? And what of the deer? Standing like guardians, what will they do after the traveler selects? How will his choice immediate change the situation? Like the High Priestess, Major Arcana II, the traveler must tap into a deeper level of knowing.

You are at a crossroads. The correct choice is unclear, at least in terms of logic, because there are too many unknowns. The Wands are not about logic; they are about inspiration and courage. Follow your gut and move ahead bravely.

Be aware of stagnation. The Wands are about action. This is not a time to stand still.