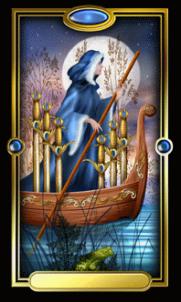 By the light of the full moon, a woman makes her secret, silent journey by water. Where is she traveling to and what does she leave behind? Does it matter? Will her destination change anything in her life? She brings with her the way she views the world, as shown by the swords in her boat. As the saying goes, “where you go, there your are." Major Arcana VI, the Lovers, is about making balanced choices. By traveling over the water (her emotions) and carrying her same thought patterns (the swords), she is making a choice, but is it a sound one? The toad seems to indicate more of a reliance on the reptilian part of the brain, from whence the “flight"impulse arises.
You are running from something. Unless you examine the way you think, your running will accomplish nothing accept an immediate escape from what is troubling you. Until you learn to face it, it will come up again in some other guise.
Be aware of overanalyzing. Our ancient instincts exist as a defense mechanism. Although probably not as often now, there are times when fleeing a dangerous situations is the right thing to do.